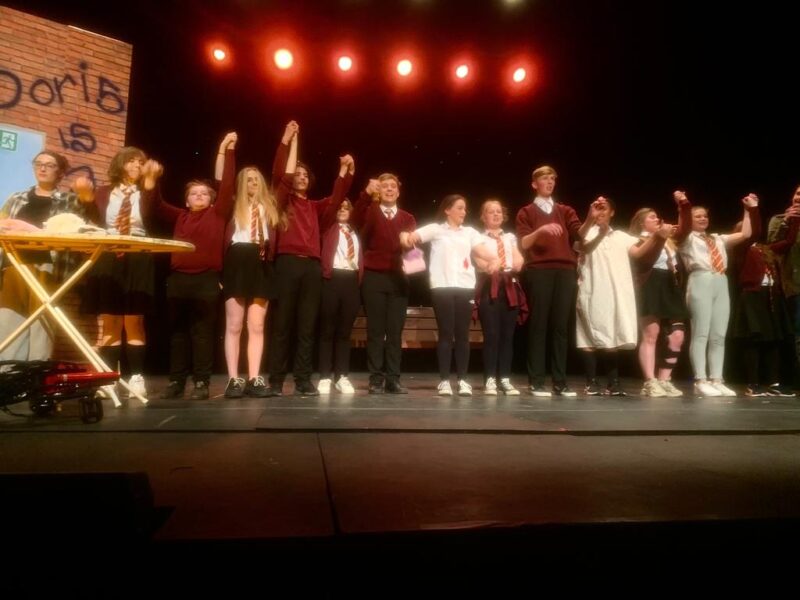 South Wirral High School are proud and excited to announce that our Drama company, LORIC Players have been selected from over 300 schools, colleges and youth theatre groups in this year’s National Connections 2022 – and have been invited to perform at the National Theatre in London next month.

The group will perform Chat Back a new play by David Judge at the 2022 Connections Festival, having first performed the play at Connections partner theatre Crewe Lyceum. Ten companies are selected to perform at the NT to represent the range of exciting work being produced nationwide.

This is LORIC Players’ first year as a company which evolved from a Drama Club attended after school pre-pandemic. The company is made up of students aged 13-17. They chose to stage Chat Back by David Judge because they felt it represented parts of their community and students could relate to moments within the play and found it an energetic and episodic piece of theatre to explore.
Now in its 27th year, Connections champions the talent of young people across the UK, with ten new plays by established and emerging contemporary playwrights exclusively commissioned for young people to stage and perform. Over 5,400 young people participating from 228 youth groups have had the opportunity to stage their production at one of 28 leading partner theatres nationwide, including Crewe Lyceum.

Chat Back is a play about the underclass – all those young people who are so ‘bad’, disempowered, alienated, ostracized, and abandoned – that even on the last day of school they still find themselves in detention. We watch a snapshot of the lives of each individual as they negotiate their way around the obstacles en route to discovering their identity, their economic power or lack of, their lyrical dexterity or lack of, and the meaning of in their lives, revealed through their desires, hopes and fears.
Participants are involved with every aspect of creating and staging the play and take on a variety of backstage and off-stage roles, from operating lights and sound to set and costume design and stage management.

“I know that our young performers will never forget this experience. This opportunity has allowed them to access new writing, explore performing in different venues and they even had the chance to meet the playwright! The support given by the NT team has been exceptional throughout; Connections is about bringing young performers together and making theatre accessible to all”.

“Connections has been the best experience of our lives! Getting to perform at the National Theatre in London is a once in a lifetime opportunity for us. What Connections has done for young people across the country is inspiring. They have supported improving our confidence and helped us to build and strengthen relationships with each other across school year groups which is something we wouldn’t ordinarily do. Reflecting on our play, social class does not define who we are or who we want to become and National Connections echoes just that as it’s all inclusive”.

“It is fantastic that young people have been performing in theatres right across the UK as part of Connections over the past few months and we are so excited to have the NT building buzzing with their talent in June for the culmination of the nationwide festival. We know how resilient and enthusiastic our participants have been over the past year and we’re thrilled to be able to come together to celebrate these emerging theatre-makers at the NT”.

0Shares
PrevNext
We are using cookies to give you the best experience. You can find out more about which cookies we are using or switch them off in privacy settings.
AcceptPrivacy Settings