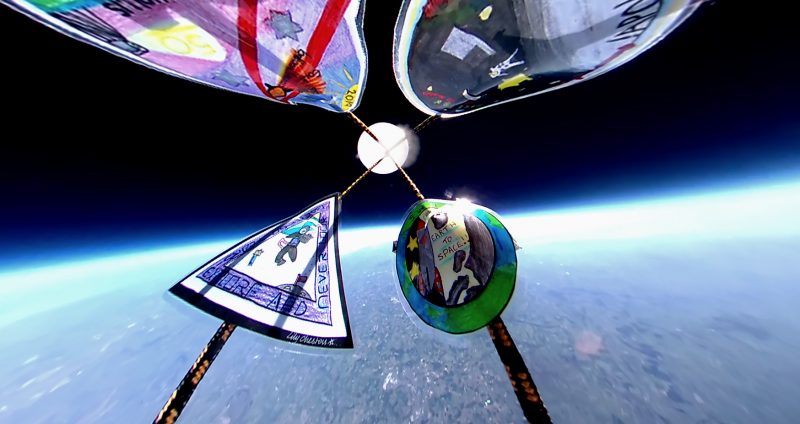 In conjunction with hi-impact consultancy, the school provided a week of exciting space-themed activities culminating in the launch of a balloon – with payload – into near space!

Students from South Wirral & local primaries took part in a carousel of activities provided by a combination of South Wirral and hi-impact staff including:

Students used Google Earth and an online flight predictor to look at the implications of weather conditions and the choice of launch site on the flight path of the balloon.

They looked at the altitude of the launch site, possible height the balloon would burst at, its descent rate and how this, and the weather conditions, could affect the path of the balloon, its launch and eventual landing site.

They used this information from the predictor website to Google Earth and use it to visualise in 3d, the balloon flight. This was compared with the data we received from the GPS trackers on the actual flight as a 3d visualisation.
Mission Patch Activity

Students learned what a mission patch is and how NASA teams to design a patch for each mission. They then designed their own mission patch for the Balloon launch using ‘pen’ and paper.

The students were introduced to the Raspberry Pi which we used to record data from the space mission. They learned how to code the Sense Hat Pi to record temperature, humidity and air pressure with the Sense Hat emulator using the Python programming language.

Students used the emulator to test their code and ensure as they change the different variables such as temperature, process and humidity, as it is recorded by the Sense hat. Additionally, on the launch day, the sensor sent to space recorded altitude and record images form a Pi camera.

All the data will be recorded on the Pi, downloaded as a spreadsheet

Students worked in groups to think of a simple experiment to send up to near space that can be contained in a ping pong ball. They had to decide what ‘object’ they can realistically send-up by the launch day and say what they thought would happen to the object as it travels through a thinning atmosphere

Students were asked to think about the possible ways to return the equipment for earth to retrieve data and experiments. They designed a range of structures to ensure the payload will land safely, then designed a structure using everyday materials to safely return a simulated payload to the Earth.

Man on the Moon

The Physics of Balloon launch

Students also had the opportunity to hold a 40 minute Skype call with Dr Croft, Professor of Astrophysics UC Berkeley.

Dr Croft discussed the physics of launching and operating craft and robots in space and how the payload and balloon will behave as it rises into the atmosphere and into near space. Dr Croft has launched a number of successful balloon launches with students in the USA. He is involved with the Breakthrough Listen initiative, the world’s largest SETI program based at the University. Students were invited to ask questions to Dr Croft in the Q and A session as well as respond to questions and ideas he posed through the session.

Wednesday saw the ‘tethered launch’ of the balloon on the school field. Groups of students were able to experience the balloon close up and one of the hi-impact flight crews spoke about the inflection and flight of the balloon, making links to the work activities they have been involved with over the last few days.

Final predictions were made, with Ping Pong Science winners revealed and the plan for Thursday finalised.

“Today we went to Welshpool to launch a balloon into space! It had a parachute and payload attached to it, including a 360 degree camera, tracker, ping pong experiments and a phone. We tracked it down and looked a the experiments. The photos we captured are amazing!”

On the final day, a small group of students travelled to Welshpool to launch the balloon and payload, with the remaining students staying back at ‘Mission Control’ to monitor the journey.

The launch was a huge success, with the balloon reaching a phenomenal height of 27,261 meters!

We are using cookies to give you the best experience. You can find out more about which cookies we are using or switch them off in privacy settings.
AcceptPrivacy Settings